I had been planning on attempting my first marathon while I was 40. That didn’t happen due to 2 running injuries. The first was tendinitis in my left lower leg and the second was an ankle sprain in my left ankle. I spent many days, weeks and months cursing my body! But I did get in to see a Physical Therapist to learn what I was doing wrong in my running that was causing my injuries (the sprained ankle not being one in question…I stepped on a pinecone and wrenched my ankle due to my not paying close enough attention to what was in front of me).

My PT examined my gait as well as my hip flexibility. My hips were tight as could be! And my gait was all wrong because my hips didn’t move like they’re supposed to. My upper body would compensate for the balance required to remain in walking or running motion. After working through a few months of PT exercises I was ready to take on long distances again. Long distances for me being anything 5 miles or more. The farthest I’d ever run was a half marathon in April of 2015.

I started to plan my marathon options and training near the end of 2015. I really wanted to run the St. George Marathon, but that is one of those lottery runs so there would be no guarantee that I’d get in for 2016.  So I kept my eyes peeled, seeking out a run that I thought I would enjoy.

In November of 2015 I had met two new running mates, Becky and Sarah, through another runner friend of mine, Lisa.  Sarah was new to running and lived only 15 minutes from me.  I was so excited!  Finally!  A running buddy that lives nearby!  And to make it more fun, Sarah had signed up to run her first marathon, the Yuengling Shamrock Marathon in Virginia Beach.  Lisa and Becky were signed up for this run as well.  This was awesome because Sarah would need to run a lot for training which meant that it was that much more likely that we’d be able to run together frequently.  Additionally, I could get some marathon training tips by helping Sarah, and maybe get a better idea about when I want to give that milestone a shot.

After a couple of runs with all of these gals, they suggested that I sign up for the marathon as well.  We could ALL run it together!  I said, “no thanks.”  I thought that there was no possible way that I could be ready, mentally or physically, to run 26.2 miles by the coming spring.  I needed more time to prepare myself for that kind of a commitment.

So I signed up for the run a few days later.  They twisted my arm.  Though it didn’t take much.  I figured, why not?  If I sign up for it I will have to train diligently, and the bonus was that I’ll have a great support group to train with and on race day.

Training has been going quite well.  We were able to coordinate most of our long runs so that we could all train together.  I even met yet another running mate, Jen, who also had her arm twisted like mine and will be running Shamrock with us.  Sarah and I ran several of the shorter long runs together, and we were also able to meet up for a few other small runs here and there as our schedules would allow.  The long runs were definitely much easier and more enjoyable with the company of this crew than if I had to run them alone.  Especially during those times when conditions were much less than ideal.  We ran through rain, snow, wind and cold! 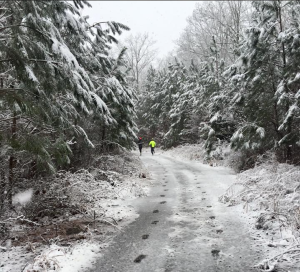 15 Mile Run in the snow and slush

I did end up having to do the 20 mile training run solo.  Everything went okay up until about mile 17.  My hamstrings started cramping up on me and made it really difficult for me to push through those last 3 miles.  I managed to finish all 20, and then started to have thoughts like “how on earth am I going to be able to run 26.2 miles when I could barely finish 20?”  I was starting to worry, until the next day when I was still able to move and was without pain.  I’ll find a way to make it to the finish line, even if it takes me 6 hours!

On the shorter run days when my schedule wouldn’t cooperate with Sarah’s, I relied on CJ to keep me company.  He’s been quite the entertaining running partner!  I’d try to keep up with him on my speed training days.  On longer run days he’d wander off ahead and find surprises for me. 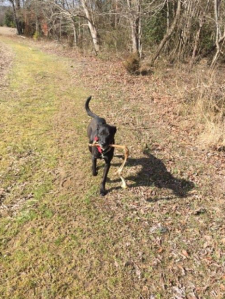 “Look what I brought for you!”

It’s hard to believe that this time next week I’ll be able to call myself (hopefully) a marathoner!  Whether or not I ever do another will be decided after I finish this one.  Stay tuned…

This site uses Akismet to reduce spam. Learn how your comment data is processed.